Jewellery, throughout history, has always been a symbol of status and style. Jewellery can amp up a basic outfit or give the wearer an added sense of refinement when attending a glitzy function. With the right assemble, you are sure to stand out from the crowd. Certain pieces of jewellery hold a lot more significance than just dazzling aesthetics, and in themselves make a statement to the world. The Mangalsutra chain for instance, takes this description above and beyond. Beautiful and captivating as it is, it is so much more than just a statement piece, heralding the sign of a married woman. Here, at Ashok Jewellers, we offer these necklace pieces in a variable range. Not only do we stock off the shelf designs, we offer custom design services for Mangalsutra chains. 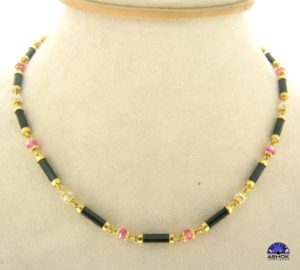 What are Mangalsutra chains?

The name is quite common in the Indian community and you have probably seen one countless times even if you are not fully familiar with them, but do you really understand the concept of Mangalsutra chains. The Mangalsutra is a necklace made up of black and gold beads, usually accompanied with a pendant. The reason that they are among the most prominent of jewellery pieces for Indian women is because they are worn by married women as a sign of their marital status. Due to the various sub sectors of Hinduism, you are bound to come across many different variations of the Mangalsutra chain. Depending on the region or cultural differences, Mangalsutra chains can also be made with red, white or gold beads. Custom made Mangalsutra chains are a store specialty here at Ashok Jewellers. Modern, contemporary designs are sought by brides so that they can wear a unique piece on their special day. Choosing your jeweller in this regard should be done with wise resolve. Mangalsutra chains not only take a prime part in wedding ceremonial festivities but are also worn lifelong, so your jeweller must be someone who is to be trusted and willing to take the design journey with you, giving an end result that is sure to be worn with pride each and every day. 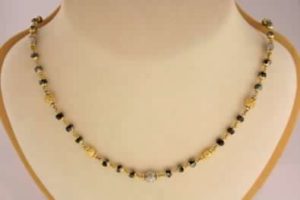 Mangalsutra chains are more than just a fashion accessory. Its name itself translates to “auspicious thread”. The name is derived from Sanskrit and fits appropriately with the task it is made to perform. In Hindu tradition, there are many signs signalling a married woman from bangles to toe rings. The Mangalsutra is undoubtedly the most important. Mangalsutra chains are tied around the neck of a bride by her groom. This is one of the main and most sacred elements of a Hindu wedding. Much like the western custom of a wedding band, Mangalsutra chains holds the same value. The chain symbolizes the union of a couple. When a husband places it around his wife’s neck, it is done under the holy guidance of a priest and is a promise he is making for them to stay together in a happy union. During the ceremony the Mangalsutra chain is tied together with 3 knots. The first knot represents an eternal loyalty of the bride to her husband. The second knot represents the bride’s acceptance and commitment towards her new family. The third knot is devoted to god, to have his hand over the union.

The chain itself does not simply signify the marital status of a woman but is stated to have many spiritual benefits as well. They are worn as protection pieces because of the belief that that the stones themselves attract negativity. Mangalsutra chains can be custom made in terms of design. The concept however, remains the same. The intertwined black and gold beads represent primal energy and this is believed to attract any negative energy aimed towards the couple. This will aid in their efforts to keep their marriage happy, strong and lasting. The gold beads represent fire and air energies while the black beads represent earth and water energies. When black and gold are combined, as they are on Mangalsutra chains, their power base is heightened, allowing for a powerful repulsion of any negative energy thrown towards the couple. Mangalsutra chains are also known for its protective qualities.

As we have said there are many versions of the Mangalsutra chain. The Tamil equivalent of a Mangalsutra is the Thaali. It is widely believed that the custom of tying such a necklace began in the southern part of India. The history of Mangalsutra chains can be traced all the way back to the 6th century when it was first used as the symbol of a married woman. Another interpretation of Mangalsutra chains comes from the Andhra Pradesh region where instead of one pendant, the Mangalsutra will contain 2, which will come from both the bride and grooms family, signalling a union between the 2 families. The slight differences between the chain designs, also portray to the world, the cultural following of the family. Mangalsutra chains are not solely used in Hindu weddings. Christian traditions in Kerala also make use of this proud tradition. This is staying true to the belief that the chain holds more than just religious and marital connotations but is adhering to its protective qualities. Mangalsutra chains have evolved with the times and today woman lean towards the slimmer and sleeker designs as opposed to the heavier versions used in the past. Women want to show to the world that they are married, but not to have a chain that is too overpowering in their work or everyday lives. Still, the premise of the chain remains the same and here at Ashok Jewellers we have adapted to the times while still retaining its traditional values, to create Mangalsutra chains that captivate onlookers yet to still be tasteful and traditional. 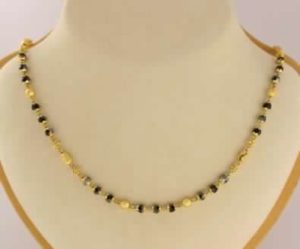 Subscribe for the latest designs delivered to your inbox