” One of my favorite stones is blue topaz. This is because it is linked with the magician and with traits of leadership and charisma, but also because it looks exquisite against denim and I am often to be found in a pair of jeans! A year or so ago, I came across a gorgeous eleven carat princess cut stone and knew immediately how I wanted it set. The image in my mind was of this large stone seemingly magically suspended on two fine bands of white gold and diamonds. I approached the family jeweler (who is a darling but rather conservative). He hummed and hawed and finally proclaimed that such a thing couldn’t be achieved. He suggested a more ‘sensible’ setting…Determined to have my way, I showed the stone to Yuvati who, being young, daring and brilliant, quickly formulated a sketch and explained the technicalities of creating what she called a ‘floating’ setting, unusual for such a large stone. Three weeks later the ring was made and it was EXACTLY how I had imagined! It is one of my favorite pieces now and only has one drawback – whenever I wear it, people around me (men and women alike) shriek with admiration.” 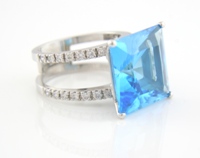 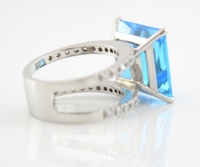